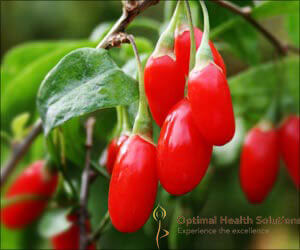 In the Chinse medicine, the kidneys are the power center of the body. And goji berries are considered to be stimulating tonic for the kidneys. As a result, they have been widely used as a popular herb in the Traditional Chinese Medicine. These fruits are best known for their mysterious power for longevity, beauty, and health.

According to Wikipedia, goji berries are a good source of calcium, potassium and iron. They contain many amino acids and trace minerals including zinc and selenium. They also contain a wide range of phenolic pigments including zeaxanthin that are known as antioxidants. In fact, goji berries are one of the richest food sources for zeaxanthin. Goji berries are noted for their incredible health benefits which include, but not limited to the following:

Goji berries are great sources of zeaxanthin, a type of antioxidant that protects your eyes from intense and high-energy light waves like the ultraviolet rays of the sun. Studies suggested that ascorbic acid and zeaxanthin are essential to the human macula, which is linked to a healthy vision. These fruits also help in decreasing the risks of developing age-related eye degeneration and cataract. Although zeaxanthin can be found in goji berries, this antioxidant can also be found in other sources like broccoli, spinach, and kale, etc.

Besides foods, what else can contribute to a dry eye? Read the shocking truth behind the dry eyes.

In order to function, look and feel like an energetic and youthful person, one has to boost the production of natural growth hormone. Goji berries are considered as one of the super foods because the nutrients found in goji berries help stimulate the pineal and pituitary glands, which increase the production of HGH or Human Growth Hormone. These fruits are also rich in L-glutamine and L-Arginine, which are essential amino acids that work together to improve HGH, and revitalize metabolism and appearance.

Goji berries are known to improve the quality of your sleep. They contain magnesium and thiamine, the two essential nutrients required for improved sleep. Thiamin also improves your energy level and mood, while magnesium improves the sleep quality by reducing the time one needs to fall asleep.

Tart cherry is another wonder food to promote a sound sleep.

Recipe one: Goji and Date Tea 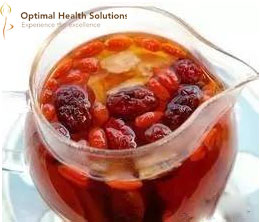 Procedure: Wash the dry dates and goji berries first, then put all the ingredients in a teapot, pour the hot water on top, cover it and leave it for 5 minutes, then the tea is ready to drink. You can add a tsp. of honey to enhance the flavor if you like.

Health benefits : Drinking this tea on a regular basis will bring a young and vibrant look on your face. It also improves anemia. This tea is very simple and easy to make, don’t you think so? 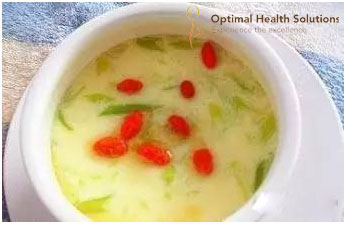 Procedure: Wash the dry goji berries first, then put them in a bowl. Whip the eggs with goji together to even the texture. Steam it for about 10 minutes until the egg is cooked.

Health benefits : This soup will help improve your vision. It is also a great anti-aging recipe. 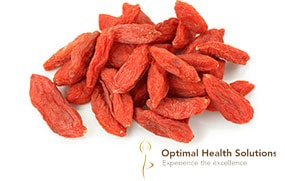 Procedure: Soak the black beans overnight and discard the soaking water. Wash dry goji berries. Put all the ingredients in a pot and add enough water that is 2-3″ above the beans. Bring it to a boil, and then cook it with small heat for 2 hours. That is it. You can put it in the fridge to enjoy it for a few days.

Goji berries benefit our health in many ways. This is one of the main reasons why these fruits are now gaining popularity and positive recognition. When you consume a small amount of these fruits every day, you will definitely wake up feeling healthier and better. The benefits of goji berries are truly amazing. However, over consumption of goji berries may cause sore throat due to their warm nature according to the Chinese Medicine.

What are your favorite recipes with goji berries? Please share with us.

Check our FREE audio course that will provide you smart tips to lose weight easily and stay healthy.

“One is wise to cultivate the tree that bears fruit in our soul.” ~ Henry David Thoreau